This is an edited and adapted chapter from Donnellan, M. B. (2019) in the NOBA series on psychology.  For full attribution see end of chapter.

Personality psychology is about how individuals differ from each other in their characteristic ways of thinking, feeling, and behaving. Some of the most interesting questions about personality attributes involve issues of stability and change. Are shy children destined to become shy adults? Are the typical personality attributes of adults different from the typical attributes of adolescents? Do people become more self-controlled and better able to manage their negative emotions as they become adults? What mechanisms explain personality stability and what mechanisms account for personality change?

Heterotypic stability refers to the psychological coherence of an individual’s thoughts, feelings, and behaviors across development. Questions about heterotypic stability concern the degree of consistency in underlying personality attributes. The tricky part of studying heterotypic stability is that the underlying psychological attribute can have different behavioral expressions at different ages. (You may already know that the prefix “hetero” means something like “different” in Greek.) Shyness is a good example of such an attribute because shyness is expressed differently by toddlers and young children than adults. The shy toddler might cling to a caregiver in a crowded setting and burst into tears when separated from this caregiver. The shy adult, on the other hand, may avoid making eye contact with strangers and seem aloof and distant at social gatherings. It would be highly unusual to observe an adult burst into tears in a crowded setting. The observable behaviors typically associated with shyness “look” different at different ages. Researchers can study heterotypic continuity only once they have a theory that specifies the different behavioral manifestations of the psychological attribute at different points in the lifespan. As it stands, there is evidence that attributes such as shyness and aggression exhibit heterotypic stability across the lifespan (Caspi, Bem, & Elder, 1989). Individuals who act shy as children often act shy as adults, but the degree of correspondence is far from perfect because many things can intervene between childhood and adulthood to alter how an individual develops. Nonetheless, the important point is that the patterns of behavior observed in childhood sometimes foreshadow adult personality attributes.

Homotypic stability concerns the amount of similarity in the same observable personality characteristics across time. (The prefix “homo” means something like the “same” in Greek.) For example, researchers might ask whether stress reaction or the tendency to become easily distressed by the normal challenges of life exhibits homotypic stability from age 25 to age 45. The assumption is that this attribute has the same manifestations at these different ages. Researchers make further distinctions between absolute stability and differential stability when considering homotypic stability.

In general, average levels of extraversion (especially the attributes linked to self-confidence and independence), agreeableness, and conscientiousness appear to increase with age whereas neuroticism appears to decrease with age (Roberts et al., 2006). Openness also declines with age, especially after mid-life (Roberts et al., 2006). These changes are often viewed as positive trends given that higher levels of agreeableness and conscientiousness and lower levels of neuroticism are associated with seemingly desirable outcomes such as increased relationship stability and quality, greater success at work, better health, a reduced risk of criminality and mental health problems, and even decreased mortality (e.g., Kotov, Gamez, Schmidt, & Watson, 2010; Miller & Lynam 2001; Ozer & Benet-Martínez, 2006; Roberts, Kuncel, Shiner, Caspi, & Goldberg, 2007). This pattern of positive average changes in personality attributes is known as the maturity principle of adult personality development (Caspi, Roberts, & Shiner, 2005). The basic idea is that attributes associated with positive adaptation and attributes associated with the successful fulfillment of adult roles tend to increase during adulthood in terms of their average levels.

Roberts et al. (2006) found that young adulthood (the period between the ages of 18 and the late 20s) was the most active time in the lifespan for observing average changes, although average differences in personality attributes were observed across the lifespan. Such a result might be surprising in light of the intuition that adolescence is a time of personality change and maturation. However, young adulthood is typically a time in the lifespan that includes a number of life changes in terms of finishing school, starting a career, committing to romantic partnerships, and parenthood (Donnellan, Conger, & Burzette, 2007; Rindfuss, 1991). Finding that young adulthood is an active time for personality development provides circumstantial evidence that adult roles might generate pressures for certain patterns of personality development. Indeed, this is one potential explanation for the maturity principle of personality development.This pattern of increasing stability with age is called the cumulative continuity principle of personality development (Caspi et al., 2005). This general pattern holds for both women and men and applies to a wide range of different personality attributes ranging from extraversion to openness and curiosity. It is important to emphasize, however, that the observed correlations are never perfect at any age (i.e., the correlations do not reach 1.0). This indicates that personality changes can occur at any time in the lifespan; it just seems that greater inconsistency is observed in childhood and adolescence than in adulthood.

In general, the picture that emerges from the literature is that personality traits are relatively enduring attributes that become more stable from childhood to adulthood. Nonetheless, the stability of personality attributes is not perfect at any period in the lifespan. This is an important conclusion because it challenges two extreme perspectives that have been influential in psychological research. More than 100 years ago, the famous psychologist William James remarked that character (personality) was “set like plaster” for most people by age 30. This perspective implies near perfect stability of personality in adulthood. In contrast, other psychologists have sometimes denied there was any stability to personality at all. Their perspective is that individual thoughts and feelings are simply responses to transitory situational influences that are unlikely to show much consistency across the lifespan. Current research does not support either of these extreme perspectives. Nonetheless, the existence of some degree of stability raises important questions about the exact processes and mechanisms that produce personality stability (and personality change). 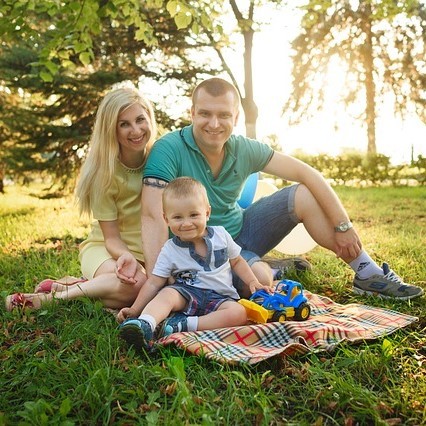 It’s quite easy to imagine, “Once I’m 30, married, and with a family, I will be that person for the rest of my life.” But the research shows that while some traits are stable, others continue to develop and adjust to our new environments. [Image: CC0 Public Domain, https://goo.gl/m25gce]

The How and Why of Personality Stability and Change: Different Kinds of Interplay Between Individuals and Their Environments

These four processes of attraction, selection, attrition, and manipulation explain how a kind of matching occurs between personality attributes and environmental conditions for many individuals. This positive matching typically produces personality consistency because the “press” of the situation reinforces the attributes of the person. This observation is at the core of the corresponsive principle of personality development (Caspi et al., 2005; Roberts, Caspi, & Moffitt, 2003). Preexisting personality attributes and environmental contexts work in concert to promote personality continuity. The idea is that environments often reinforce those personality attributes that were partially responsible for the initial environmental conditions in the first place. For example, ambitious and confident individuals might be attracted to and selected for more demanding jobs (Roberts et al., 2003). These kinds of jobs often require drive, dedication, and achievement striving thereby accentuating dispositional tendencies toward ambition and confidence.

Additional considerations related to person–environment transactions may help to further explain personality stability. Individuals gain more autonomy to select their own environment as they transition from childhood to adulthood (Scarr & McCartney, 1983). This might help explain why the differential stability of personality attributes increases from adolescence into adulthood. Reactive and evocative person–environment transactions also facilitate personality stability. The overarching idea is that personality attributes shape how individuals respond to situations and shape the kinds of responses individuals elicit from their environments. These responses and reactions can generate self-fulfilling cycles. For example, aggressive individuals seem to interpret ambiguous social cues as threatening (something called a hostile attribution bias or a hostile attribution of intent; see Crick & Dodge, 1996; Orobio de Castro, Veerman, Koops, Bosch, & Monshouwer, 2002). If a stranger runs into you and you spill your hot coffee all over a clean shirt, how do you interpret the situation? Do you believe the other person was being aggressive, or were you just unlucky? A rude, caustic, or violent response might invite a similar response from the individual who ran into you. The basic point is that personality attributes help shape reactions to and responses from the social world, and these processes often (but not always) end up reinforcing dispositional tendencies.

Although a number of mechanisms account for personality continuity by generating a match between the individual’s characteristics and the environment, personality change or transformation is nonetheless possible. Recall that differential stability is not perfect. The simplest mechanism for producing change is a cornerstone of behaviorism: Patterns of behavior that produce positive consequences (pleasure) are repeated, whereas patterns of behavior that produce negative consequences (pain) will diminish (Thorndike, 1933). Social settings may have the power to transform personality if the individual is exposed to different rewards and punishments and the setting places limitations on how a person can reasonably behave (Caspi & Moffitt, 1993). For example, environmental contexts that limit agency and have very clear reward structures such as the military might be particularly powerful contexts for producing lasting personality changes (e.g., Jackson, Thoemmes, Jonkmann, Lüdke, & Trautwein, 2012).

It is also possible that individuals might change their personality attributes by actively striving to change their behaviors and emotional reactions with help from outsiders. This idea lies at the heart of psychotherapy. As it stands, the conditions that produce lasting personality changes are an active area of research. Personality researchers have historically sought to demonstrate the existence of personality stability, and they are now turning their full attention to the conditions that facilitate personality change. There are currently a few examples of interventions that end up producing short-term personality changes (Jackson, Hill, Payne, Roberts, & Stine-Morrow, 2012), and this is an exciting area for future research (Edmonds, Jackson, Fayard, & Roberts, 2008). Insights about personality change are important for creating effective interventions designed to foster positive human development. Finding ways to promote self-control, emotional stability, creativity, and an agreeable disposition would likely lead to improvements for both individuals and society as a whole because these attributes predict a range of consequential life outcomes (Ozer & Benet-Martínez, 2006; Roberts et al., 2007)

Videos: Brian Little PhD on “Who are you Really” Brian Little is a long-term personality researcher and author.

Active person–environment transactions
The interplay between individuals and their contextual circumstances that occurs whenever individuals play a key role in seeking out, selecting, or otherwise manipulating aspects of their environment.
Corresponsive principle
The idea that personality traits often become matched with environmental conditions such that an individual’s social context acts to accentuate and reinforce their personality attributes.
Cumulative continuity principle
The generalization that personality attributes show increasing stability with age and experience.

Heterotypic Stability:  effects of fundamental temperamental tendencies change with age, but temperament and personality stay the same. In other words, behaviors associated with traits manifest differently, but the trait stays similar in each of us.

Maturity principle
The generalization that personality attributes associated with the successful fulfillment of adult roles increase with age and experience.

This chapter is an edited version that is adapted from the NOBA Project as found here:

Grateful appreciation to the authors for making this an open use chapter. The original authors bear no responsibility for this edited and adapted version.

The Balance of Personality by Chris Allen is licensed under a Creative Commons Attribution-NonCommercial-ShareAlike 4.0 International License, except where otherwise noted.