Key questions for this investigation

Tool used in this investigation

Carbon Cycle Diagram – Figure 1 of this activity.  An on-line, interactive version of this diagram is forthcoming, along with additional activities.

A major player in changing climate is carbon in its various forms. This is in large part because of how increasing levels of carbon dioxide in the atmosphere are impacting the energy budget of the earth’s climate. Key to understanding this impact is understanding how carbon moves through the climate system via a process known as the carbon cycle.

The carbon cycle is the continuous exchange of carbon between living organisms, the oceans, atmosphere, and the earth’s crust. During this exchange various carbon compounds are continuously created, destroyed, and stored. Chief among these compounds are carbon dioxide (CO2), methane (CH4), calcium carbonate (CaCO3), and hydrocarbons (HxCy). The chief mechanisms by which this happens include…

Figure 1 is a diagram of this cycle that you will use for activity A. The diagram shows principle carbon flows and storages. One of your tasks in this activity will be to identify these exchanges and major carbon reservoirs. Your task in Activity B will be to investigate how we influence this cycle and the consequences of that influence. 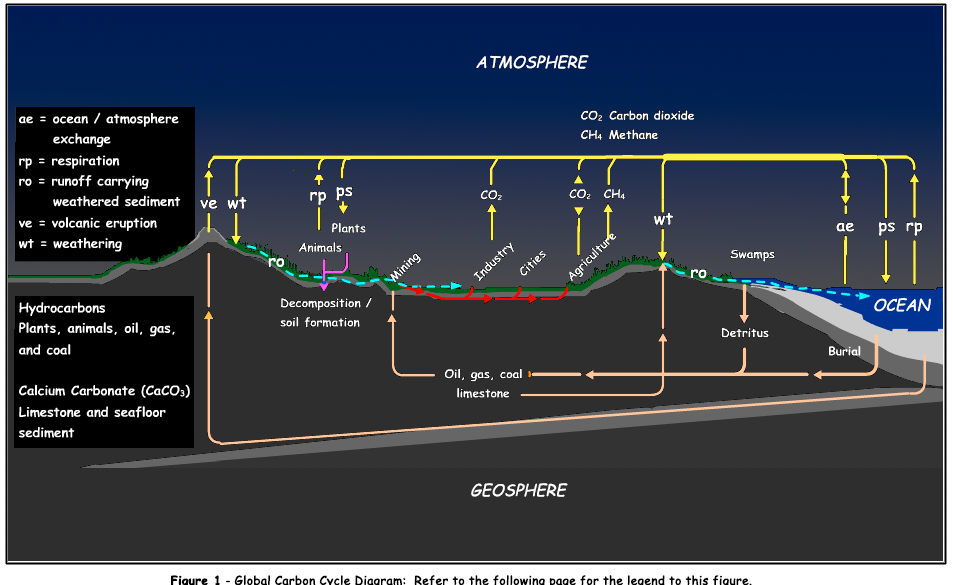 Figure 1 is a diagram of the global carbon cycle showing principal flows and storage of carbon in its various forms. The diagram is divided into three “spheres”, the atmosphere, ocean, and geosphere (earth’s crust). The yellow arrows show the flow of carbon compounds between these three spheres, initials identify the principle mechanisms by which these exchanges take place, and chemical formulas identify principle forms of carbon. Additional information is available in the legend below.

Residence time – In the case of the carbon cycle, this is the average length of time that carbon compounds remain in the various reservoirs listed in L4. Understanding how major greenhouse gasses influence the climatic energy balance of our planet is largely a matter of looking at the warming potential of these gasses and their abundance in the atmosphere. In turn, atmospheric abundance of these gasses is dependent on their atmospheric residence time.

The table below (Table 2) lists five key greenhouse gasses. In addition to showing their approximate abundance in the atmosphere and their contribution to the greenhouse effect, it also shows their Global Warming Potential (GWP) and their atmospheric residence time. The latter is a measure of the warming potential of each gas relative to an equal mass of CO2. For instance, a kilogram of CH4 has 28 times the warming potential of a kilogram of CO2. However, CO2 contributes more to the greenhouse effect because of its higher abundance. Something that is strongly influenced by its longer residence time.

Using figure 1 and the information from its legend, address the following questions…

Climate Toolkit: A Resource Manual for Science and Action by Frank D. Granshaw is licensed under a Creative Commons Attribution-NonCommercial 4.0 International License, except where otherwise noted.