Have you heard about lattice domes? Even if not, you may have heard of some outstanding projects, such as Eden Project, where a lightweight dome structure is designed to create a translucent space. Watch video 6-1 (https://www.youtube.com/watch?v=MWr67v620kY&feature=emb_logo) to learn about the design of compounded geodesic domes in the Eden Project.

Video 6-1: The geodesic dome of the Eden Project

Configuration processing of this type of spatial structure using the Euclidian geometric system is usually complicated and requires a great amount of time and effort. In the late 90s, Professor Hoshyar Nooshin, University of Surrey, Guilford, UK, developed a new geometric-algebraic system called Formex algebra. Formex algebra allows a designer to define the geometrical formulation of forms through concepts that affect movement, propagation, deformation, and curtailment. The creation of any type of spatial structure, such as space trusses, domes, vaults, hypar shells, polyhedric and free forms, can be carried out by using this mathematical system and its associated programming language, Formian. This new algebraic system, along with its designated software called Formian, allows convenient and accurate configuration processing of spatial structures. In 2018, he won the Torroja Medal – one of the highest honors in structural engineering – in recognition of his outstanding contribution to the field of spatial structures for over half a century.

A Schwedler dome includes intersecting ribs, rings, and diagonal elements. The name of this category of lattice domes is the namesake of the German Engineer J W Schwedler, who built several of this type in the 19th century. Sometimes due to the overcrowding of the elements near the crown of a ribbed or Schwedler dome, some elements are trimmed. In these cases, the dome will be called a trimmed ribbed dome or a trimmed Schwedler.

A lamella dome consists of intersecting diagonal elements and may or may not include one or more rings.

One of the well-known examples of a diamatic dome is the Tacoma dome. Tacoma wooden dome is a multi-purpose arena in Tacoma, Washington (1983). The arena has a 530-ft diameter and 152-ft height. 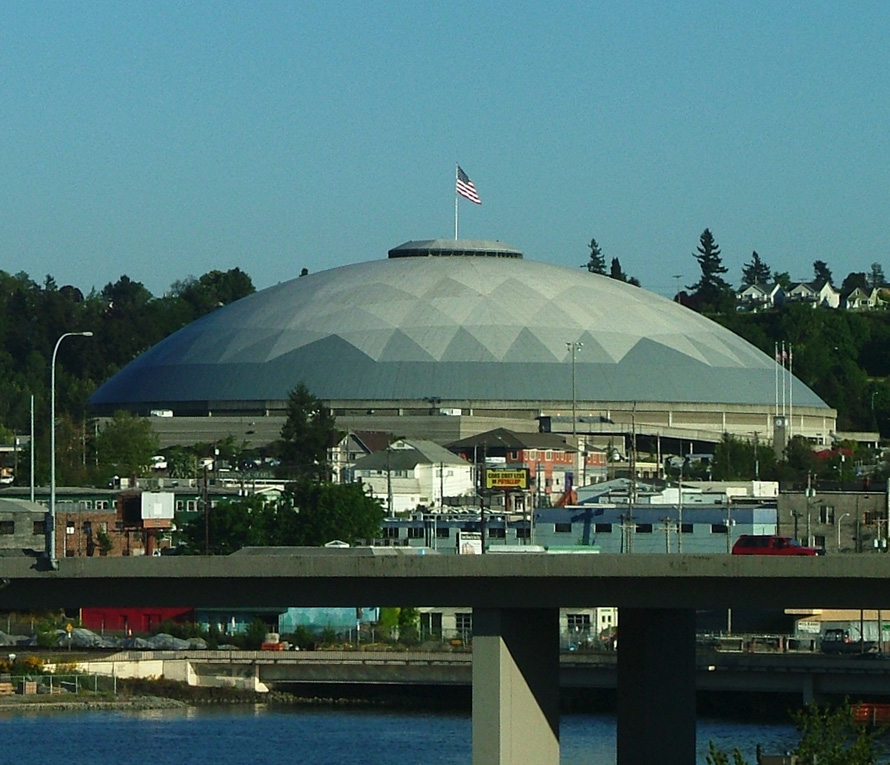 A scallop dome, similar to the marine creature scallop whose shell has arched ribs, consists of arched sectors that are separately arched. The dome itself had a general curvature, and the operation of scalloping further improves the structural behavior of the dome.

Mallow domes, so-called because they resemble the mallow flower, consist of a number of sectors with a hyperbolic paraboloidal grid.

Onion domes have a bulb-shaped body with a pointed crown and may be created with different grid patterns.

A geodesic dome is created by mapping a triangulated pattern onto a number of faces of a polyhedron and projecting the results onto a sphere that is concentric with the initial polyhedron. An icosahedron (20-faced regular polyhedron) is one of the common volumes used in creating geodesic domes.

Figure 6-13: Mapping an icosahedron onto a hemisphere to gain a geodesic dome (Image source: [9])

One famous geodesic dome is the US Pavilion in Expo 67, designed by Buckminster Fuller and built in Montreal. The double-layer geodesic dome has a 250-ft diameter and 200-ft rise. The initial cladding of the dome was made of a transparent acrylic layer which was damaged in a major file in 1977. After the renovation in 1994, the geodesic skeleton remained as an iconic monument in Montreal.

Missouri Botanical Gardens Climaton is another example of geodesic domes designed and built in double layers. The geodesic dome is a quarter sphere spanning 175 ft and housing the plant collection of the Missouri botanical garden. The dome is made of aluminum tubes and steel cables. The rise of the dome is 70 ft, and current cladding of the dome consists of freestanding glass panels.

Video 6-2: The design of an innovative lattice dome in the Dutch Marine Museum

Video 6-3: Design and construction of a geodesic dome