This chapter will discuss different types of loads and how you may consider them in structural design. Before analyzing the statics and mechanics of structures, it is essential to learn how much load a structure may carry.

Different types of loads on structures

“Static loads are assumed to be applied slowly to a structure until it reaches its peak value without fluctuating rapidly in magnitude or position. Under a static load, a structure responds slowly, and its deformation reaches a peak when the static force is maximum.” [1]

“Dynamic loads are applied suddenly to a structure, often with rapid changes in magnitude and point of application. Under a dynamic load, a structure develops inertial forces in relation to its mass, and its maximum deformation does not necessarily correspond to the maximum magnitude of the applied force. The two major types of dynamic loads are wind loads and earthquake loads”. [1]

Loads on structures are classified into the following categories:

Figure 1-1: Some types of loads that act on a typical building

The American Society of Civil Engineers (ASCE) provides a standard, SEI/ASCE 7-02, that addresses the definition of different types of loads and determines minimum design loads for buildings.

Buildings are not designed for ALL the possible loads that may affect them, but rather a reasonable combination of loads. Buildings will rarely be impacted by the dead load, maximum of live load, snow load, earthquake load, wind load, and an impact load at a single moment. The reasonable combinations of the loads are also defined in the ASCE 7 Standard. For example, the following load combinations may be studied, and whichever produces the most unfavorable effect should be taken into account for structural design.

Dead load is simply the self-weight of all major construction materials, including the building structures, permanent walls, fixed utilities, and equipment (e.g., HVAC systems). The weight of each structural component can be measured by multiplying the volume of components by their density (Mass = Volume x Density).

For example, the weight of the wood beam shown below can be computed and described in pounds per linear foot (plf) by multiplying its density of 35 pounds per cubic foot (PCF) and its volume.

Live load is based on occupancy and includes the weight of the people, furniture, machinery (e.g. in a factory), vehicles, and equipment being used temporarily. There are two types of live loads:

The wind blowing against a building may be strong and cause discomfort or may be extreme, such as a tornado, hurricane, or heavy storm, and cause destruction. While wind load, like earthquake load, is three-dimensional in nature, its horizontal component is considered more critical in structural design. Thus, wind load is classified as a lateral load.

Wind load is a pressure load whose effect on buildings of regular shape (e.g. cubic buildings) can be analyzed considering the basic pressure equation. Wind speeds vary in different zones. For example, the wind load in Portland, OR, is 16 psf. Wind loads on every building should be determined in accordance with Chapters 26 to 30 of ACSE 7. See section 1609 and the map of basic design wind speed, V, for risk category II, III, and other structures. 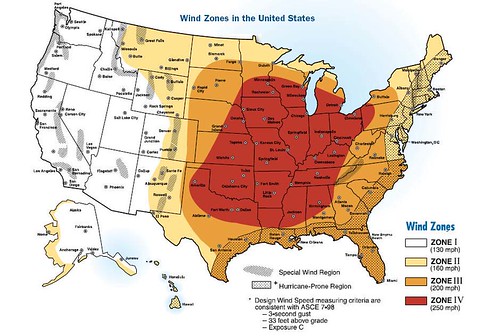 If the configuration of a building is complex or it has a high importance factor, you may need to conduct a wind tunnel test. There are not many laboratories around that do the wind tunnel test because it is expensive to have the facilities. You can send your design to those labs, and they will send back the pressure data to you. Then, engineers can design a suitable structure. Watch video 1-1 (https://www.youtube.com/watch?v=UEgk2Bgz16s&t=1s) to see flow visualization around simple building shapes in a wind tunnel. In the following, video 1-2 (https://www.youtube.com/watch?v=tHMPR7flpf4&t=250s) shows how tall buildings tame the wind.

Some software systems allow you to simulate the test. WIND CFD (Computational Fluid Dynamics) software is one of them. You can use the results of these simulation programs in the conceptual phases of design. But for critical buildings such as towers, the outcome of the simulation programs is not sufficient for specifying the structural system, and a wind tunnel test is still required.

Snow loads result from the weight of snow accumulating on a flat or sloped roof. Snow loads vary with geographic location, wind condition, geometry and slope of the roof, building, and site exposure. For example, a minimum of 54 psf snow load should be considered for buildings constructed in Montréal, QC, while 10 psf snow load is recommended for designing structures in Portland, OR. See section 1608 and the map of ground snow loads for the United States.

The tectonic plates are always slowly moving, but they get stuck at their edges due to friction. When the stress on the edge overcomes the friction, an earthquake releases energy in waves that travel through the earth’s crust and causes the shaking that we feel. An earthquake is caused by a sudden slip on a fault and may consist of a series of longitudinal and/or transverse waves known as P-wave or S-wave, respectively. A P-wave is the fastest wave.

Although earthquake vibrations are three-dimensional, their horizontal components are more critical in designing structural systems. Thus, generally, we consider earthquake load as a lateral force acting on a building. The earthquake load depends on how close the building is to fault lines. To read more about earthquakes, see “What is an earthquake and what causes them to happen?“. You may explore the latest earthquakes map and list for the U.S. and worldwide.

In addition to various types of damage to building structures, there are three major ground failures caused by earthquakes:

Video 1-3: How earthquakes impact buildings and our cities.

Video 1-5: How buildings fall in earthquakes.